40% silver Eisenhower Dollars were produced by the United States Mint from 1971-1976. However, it is important to keep in mind that the silver coins were only struck for collectors at the U.S. Mint’s facility in San Francisco. 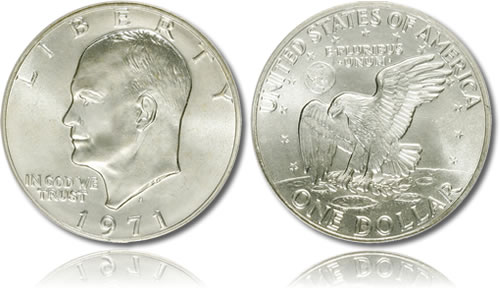 At that same time, the Mint was also producing Eisenhower Dollars for general circulation, but these coins were struck from a cupro-nickel clad composition. As such, most of the Eisenhower Dollars available today do not contain silver.

For those Eisenhower Dollars that were composed from silver, each contains .3161 ounces of the precious metal. As a result, their melt values can fluctuate as the market conditions of silver varies.

Approximate values on these strikes can be obtained from several sources including price guides, coin dealers and auction sites. One of the most accessible means of quickly finding their current market prices is the online suction site eBay which has many listings at any given time. Of course, values for the collectors silver Eisenhower Dollars are more often determined by their numismatic worth — what collectors are willing to pay to own them, instead of their melt values. That is, unless the coin in question is in poor condition and is considered a “junk silver coin.”

Eisenhower Dollars were struck to commemorate former General of the Army and President Dwight D. Eisenhower who had passed away in 1969, and to celebrate the Apollo 11 moon landing which had occurred that same year. The coins were minted for only eight years, with the silver versions only struck for a portion of that time.

The obverse or heads side of the dollar features a portrait of President Eisenhower. The reverse of most of the strikes shows a design taken from the Apollo 11 insignia. Each was the work of Frank Gasparro. A special Bicentennial Eisenhower Dollar was released to celebrate the 200th anniversary of the United States in 1976, and features a unique Liberty Bell design by Dennis Williams.

Reverse Design:
image of an eagle on the moon (Liberty Bell for the 1976 issue)