From the decision to go with a ‘best two-out-of-three’ coin-toss, to the ‘Canadian quarter’ that was eventually used, many decisions had to be made in advance 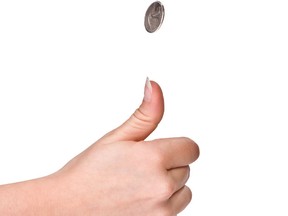 Faced with two identical bids for a government contract last fall, officials at Citizenship and Immigration Canada opted to toss a coin to determine the winner — a rare method of last resort that is mentioned briefly in a government manual.

And while it seemed like a simple way to ensure fairness, documents obtained by Postmedia News suggest the decision over which company would get a one-year contract, worth $171,534, to provide information technology and telecommunications consulting services, was anything but straightforward.

We apologize, but this video has failed to load.

tap here to see other videos from our team.

Try refreshing your browser, or

From the decision to go with a “best two-out-of-three” coin-toss, to the “Canadian quarter” that was eventually used, many decisions had to be made in advance, and staff even sought legal advice on how best to proceed, some two-and-a-half months before the tiebreaker was finally held on Sept. 14, 2012. That was three months after the bid period closed.

According to one memo, the bidders were growing anxious over the delay and officials worried the department was running the risk the bidders would complain to the Canadian International Trade Tribunal, or the Office of the Procurement Ombudsman.

Bureaucrats eventually came up with a six-point “tie breaker process” that involved separate teleconferences with each winning bidder to explain they were “tied with another” and that a coin-toss was seen as the best solution. Officials were cautioned to take care not to identify the bidders to each other so as “not to be perceived as favouring or casting one identical bidder against another,” but the documents also acknowledge “no doubt vendors will find out” on their own.

Bidders were asked to identify who they were sending to the meeting and each was afforded the same number of representatives. They also had to sign a confidentiality agreement barring them from discussing the unique process and a release form “accepting that the mutually agreed upon method — (the coin toss) — be used to break the tie.” A “neutral party” was to toss the coin.

Postmedia obtained the government documents using access to information laws. They show that, of four bids received, it came down to SOMOS Consulting Group Ltd. and ADRM Technology Consulting Group Corp. Hand-written notes dated Aug. 22 suggest both agreed to the coin-toss, recognizing “there is no further merit in reviewing the evaluations for the fourth time.”

The rules affirmed the toss would take place at the department’s Slater Street office in Ottawa and that “the coin will be tossed three times, and the party who called or was assigned the face-up side of the coin two out of three times will be the successful party.”

The little-known coin-toss tactic is contained in a Public Works and Government Services Canada manual, but the department responsible for the bulk of government procurement knew of no other instance in which it has been used.

“We have not identified any cases where a coin-toss or other such tie-breaking method was used to decide between two identical low bids that were also identical in value,” spokeswoman Lucie Brosseau said. “Should such a situation arise, we would seek legal counsel on the situation.”

That said, in this case Citizenship and Immigration handled the bid. Public Works said it wouldn’t necessarily be aware of coin-tosses involving bids handled by individual government departments.

Brosseau, however, cited a handful of instances in which coin-tosses were used at the municipal level in Ottawa, Toronto and Durham, Ont. to break tie bids for contracts. In the event of two identical low bids, she said, federal policy states it should be considered only when it’s “identical in both price and value” — the latter of which includes factors such as “a bidder’s overall satisfactory performance record, record of adequate after-sales services, best delivery date (and) greatest dollar value or exchange rate risk.”

Sign up to receive the daily top stories from the National Post, a division of Postmedia Network Inc.

Thanks for signing up!

A welcome email is on its way. If you don’t see it, please check your junk folder.

The next issue of NP Posted will soon be in your inbox.

We encountered an issue signing you up. Please try again

This Week in Flyers