Excerpt: ‘How To Defeat Your Own Clone’ 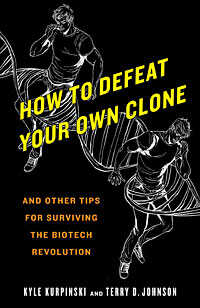 How to Defeat Your Own Clone: And Other Tips for Surviving the Biotech Revolution
By Kyle Kurpinski and Terry D. Johnson
Paperback, 192 pages
Bantam
List price: $14

Isaac Newton — one of history’s greatest scientists — is often quoted as having said, “If I have seen a little further, it is only by standing on the shoulders of giants.” (Considering what Newton thought of some of his contemporaries, however, he might have been wearing cleats.) Before we clamber upon our betters for a peek at the future, let’s take a look at what has already come to pass.

Approximately 15,000 B.C.E. — Homo sapiens domesticate their first animal, Canis lupus familiaris, the subspecies of wolf we call dogs. Having acquired a best friend, the human race decides to see if there’s anything else in nature that could use a bit of tweaking.

Approximately 10,000 B.C.E. — The sowing and harvesting of plants begins in the Middle East. This quickly replaces the previous method of acquiring food from the earth, which is best described as “wander around a lot and avoid those little red berries.” Farmers are soon selecting crops for specific characteristics such as yield, resistance to disease, and deliciousness.

Approximately 400 B.C.E. — The ancient Greeks begin writing seriously about biology and medicine, setting down principles that will confuse and mislead scientists for centuries.

1865 — Gregor Mendel reads his paper “Experiments in Plant Hybridization” at two meetings of the Natural History Society of Brunn, Moravia. Initial response is underwhelming, but the scientific mainstream eventually recognizes him as “the Father of Modern Genetics,” thanks to his groundbreaking work with pea plant heredity, shedding new light on how biological traits are passed to successive generations. Our understanding of pea biology quickly surpasses that of all other legumes.

1902 — Walter Sutton and Theodor Boveri independently propose that chromosomes may be the basis for Mendelian inheritance. Minds are blown.

1944 — Oswald Avery demonstrates that DNA is the genetic material of the cell.

1952 — Robert Briggs and Thomas J. King perform the first successful animal cloning from early embryonic cells with northern leopard frogs. Unfortunately, this is just a specific species of frog, not a frog/leopard hybrid, but yes, that would be sweet. Give us a few years.

1958 — F. C. Steward grows a complete carrot plant from a single cell taken from the root of an adult plant, demonstrating that it’s possible to create a clone of at least one organism from an adult cell. Steward spends the rest of his career politely pretending that he’s never heard the “What’s up, Doc?” joke before.

1963 — J.B.S. Haldane coins the term “clone,” without which we would have to call this book How to Defeat Your Own Genetically Identical Human. Thanks for the snappy title, J.

1966 — Marshall Nirenberg and Heinrich J. Matthaei decipher the genetic code, which turns out to be much better written than The Da Vinci Code.

1972 — Paul Berg creates the first recombinant DNA molecules, containing DNA sequences that are not normally found together. This technique becomes known as “gene splicing,” and is fundamental to genetic manipulation and engineering.

1972 — Walter Fiers sequences the first gene, for a protein that forms part of the coating on a virus. The virus immediately begins questioning its own identity and self-determination.

1973 — Stanley Cohen and Herbert Boyer create the first recombinant DNA organism — transgenic E. coli bacteria that contain a DNA sequence from frogs. E. coli has since become the go-to organism for producing large amounts of relatively simple proteins, including pharmaceuticals such as insulin, human growth hormone, and erythropoietin. Not bad for a life- form previously known mostly for making you ill.

1975 — Frederick Sanger develops the Sanger method for DNA sequencing, a technique that allows scientists to “read” a section of DNA.

1978 — “Baby Louise” is the first child born through in vitro fertilization or IVF. Well into adulthood, she’s still known as Baby (a nickname appropriate in a very limited number of social situations).

1983 — Kary Mullis invents the polymerase chain reaction (PCR) protocol, which allows for rapid synthesis and copying of specific DNA sequences, allegedly with the creative assistance of a little LSD.

1984 — Steen Willadsen performs the first successful mammal cloning of sheep from embryonic cells, and this was twelve years before we ever heard about the whole “Dolly” thing.

1990 — The Human Genome Project is launched by the National Institutes of Health to sequence the entire human genome using a combination of cutting- edge lab work and computer science. Keep in mind, this was back when a desktop computer was significantly less powerful than an iPhone, so they had their work cut out for them.

1997 — In a preemptive attempt to defeat his own clone, President Bill Clinton proposes to the U.S. Congress a five- year ban on human cloning.

1998 — Several European nations sign a ban on human cloning, but this merely encourages the more rebellious nations to do it faster and with less caution. At the same time, the Food and Drug Administration claims authority over human cloning in the United States, implying that the government thinks a clone is either a food or a drug. We’re hoping the latter.

2002 — California is the first state to legalize therapeutic cloning to produce human embryonic stem cells for new medical treatments. This comes just two years after Arnold Schwarzenegger stars in The 6th Day, and just one year after becoming governor of California. Coincidence? You decide.

2003 — The Human Genome Project is finally completed, but at three billion characters it’s going to take a while to print.

2004 — South Korean scientists claim to have successfully cloned and extracted stem cells from a human embryo, but an investigation in 2006 reveals the results to be fraudulent. While our capacity to fabricate humans remains limited, our ability to fabricate data knows no bounds.

2006 — Patents are filed for Mycoplasma laboratorium, a bacterium whose entire genome has been artificially synthesized. The proposed organism will include a “watermark”

that encodes some of the names of its creators into the organism’s DNA. Can you blame ’em?

2007 — Craig Venter publishes the first completely sequenced individual human genome — his own. Recommended summer reading. We couldn’t put it down.

2008 — President George W. Bush signs the Genetic Information Nondiscrimination Act, a law prohibiting the misuse of personal genetic information by employers or insurance companies. We figure he watched Gattaca and got really freaked out.

Now — You’ve just purchased How to Defeat Your Own Clone. Or you’re reading it for free in the bookstore … cheater.

Excerpted from How to Defeat Your Own Clone: And Other Tips for Surviving the Biotech Revolution. Copyright 2010 by Kyle Kurpinski and Terry D. Johnson. Excerpted by permission of Bantam, a division of Random House Inc. All rights reserved.