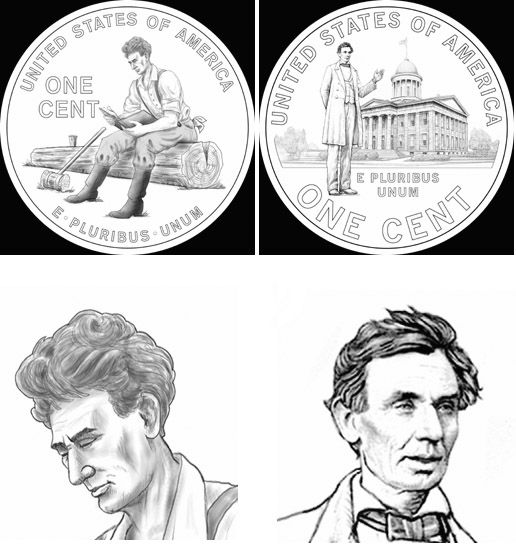 As this image gallery demonstrates, the new 2009 penny designs are intended to show four different phases of Abraham Lincoln’s life. Lincoln is only depicted in two of the designs, the second and third. The complete design is shown on the top, to give perspective, with an enlargement of Lincoln’s face. The one on the left, from Lincoln’s formative years, was drawn by Charles Vickers. Joel Iskowitz drew the one on the right.

When you look at the image of Lincoln in the third coin in this series, you can see that Iskowitz has somehow magically conveyed the hopes and dreams of a confident, but perhaps still an uncertain young man. Lincoln stands with his arm out to command your attention without demanding it, while the hand behind his back shows an artful combination of openness and a hint of insecurity.

We see Lincoln as the human being he was, with quirks and fears and hopes and dreams, rather than as the stern-faced, bearded icon that we know from our currency. In the enlargement of Lincoln’s face, especially in the eyes, Iskowitz had captured the emotion that Lincoln felt when he gave his “House Divided” speech at the Illinois Statehouse in 1858. Too bad this beautiful face is so teeny on the finished coin that we’ll hardly see the beauty here.

Contrast Iskowitz’s “fiery young orator” Lincoln with Charles Vickers’ portrait (left image) of Lincoln reading as a youth. Vickers tells his story in the overall body language, rather than in the details of the face; Lincoln is depicted as a sensitive young man, given more to books and studying than the physical toll of log-splitting. Where are the muscles a manual laborer doing this work would have? Vickers’ Lincoln is just passing through the log-splitting job, taking a break, as it were, from Lincoln’s real-life work, which was primarily intellectual rather than physical.