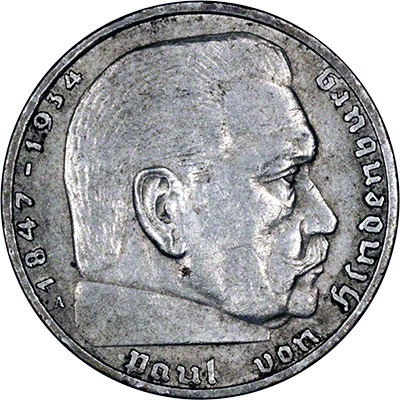 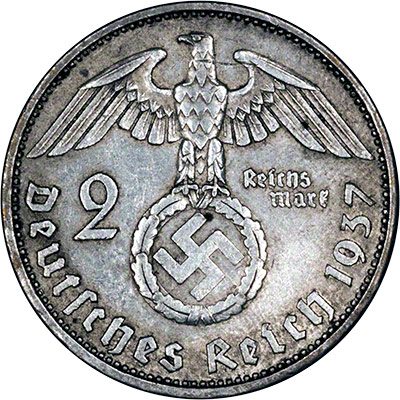 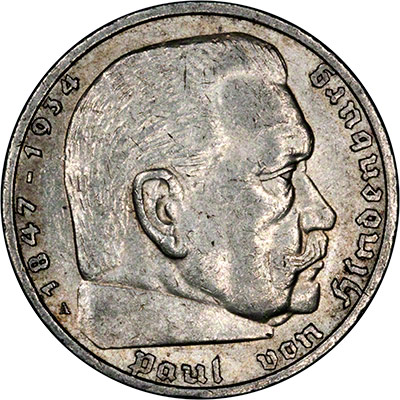 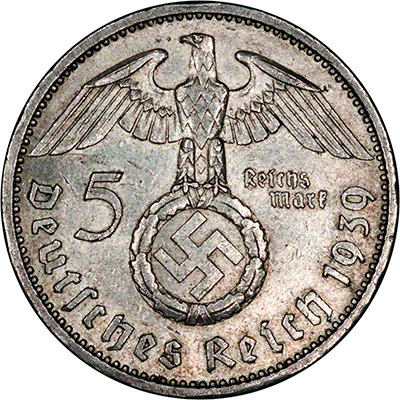 Coinage of the Third Reich.

The new Nazi government of Germany carried on with the Reichsmark that the Weimar government had introduced in 1924, which had replaced the hyperinflated Papiermark. The design of the coins was however changed to reflect the new order. The Eagle and Swastika featuring prominently on most coin denominations from 1934 onwards.

In 1934, the Potsdam Garrison church was featured on the reverse of 2 and 5 Reichsmark silver coins, to commemorate the first anniversary of the Nazi takeover, in subsequent years, Paul von Hindenburg, the thwarted former president who had died in 1934 was commemorated on the reverse (it is easy to get the obverse and reverse confused on these issues because it is usually the obverse which features a portrait on coins).

World War II
In September 1939, Germany invaded Poland, leading to a declaration of war by Britain and France on Germany. The needs of the Nazi war effort required the use of metals that had previously been used to strik coins. The silver issues were therefore discontinued, as was the nickel Reichsmark, and bronze was no longer used in subsequent lower denomination issues. The only coins struck in Germany between 1941 and 1944-45 were the 2, 5 and 10 Reichspfennig, struck in zinc, complemented by a 50 Pfennig struck in aluminium. This conservation of metallic resources did not however, stop their final defeat in 1945, for which only the 1 and 10 Reichspfennig coins were struck.

Nazi Gold Coins?
It is worth noting that that, despite their wholesale looting of gold from other countries’ bank vaults and from holocaust victims, the Nazis did not strike any gold coins, either for circulation or as commemoratives. However, it is not uncommon for certain merchants to market gold-plated 2 and 5 Reichsmark coins as ‘Nazi gold coins’, particularly on ebay. Far from enhancing the value of the coins, gold plating ruins the numismatic appeal of perfectly genuine silver coins, and collectors should be wary of buying them, unless they really want to buy what is essentially a fantasy piece that uses a genuine coin as its foundation.

Prices & Availability
All prices on our websites are subject to fluctuation and availability. Please check before ordering.

World Coins & Sets – Who Issued What?

If you want to find the value of a coin you own, please take a look at our page I’ve Found An Old Coin, What’s It Worth?

If you have an enquiry about any of our Silver Coins, we’d be happy to answer you, but please note it may be quicker to telephone us. Please see the Contact Us page of our website.

Coins Wanted
We make an active market in almost all world coins, including German coins of the Weimar Republic or other periods. If you have any of these coins to sell, please contact us, or post them to us for appraisal and offer.

…at the Lowest Possible Price