The Viking Quest is a game within the game that allows players to spin the new Viking Slots with their Coins instead of Spins and earn astronomical rewards!

Tapping on the reward icon near the bottom right of the screen will open the Mission Map which shows the players progress through the 10 unique and exciting missions!

Tapping on any rewards icon on the Mission Map reveals the items inside which offer greater and greater rewards including Gold Cards! 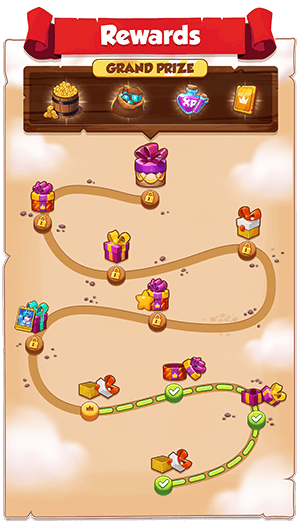 All Coins won in the Viking Slots are Raid Protected for 3 minutes after each press of the Viking “Spin” button.

When playing the Viking Slots, the Mission can be seen above the Spin button.

If the Mission states “Win 12.5M Coins” it means that the player must earn 12.5M Coins while spinning the Vikings Slots in order to receive their reward

Viking Quest is divided into two different types of missions:

Regular missions simply require the player to earn a certain amount of Coins in order to receive a reward.

The Bonus Wheel mission will test the player’s ability to earn the stated number of coins needed by hitting three “Bonus Wheel” icons in a row as shown in the video below:

With any other combination the progress bar will not move, but instead count Coins to your balance to help you continue playing!

All Coins won in the Viking Slots are Raid Protected for three minutes after each press of the Viking “Spin” button.