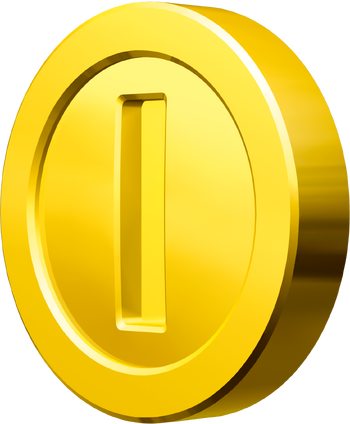 Pick coins up to increase your kart’s speed. Not having coins could result in consequences.

A Coin is an iconic item from the Mario series, and has been used in various mainstream Mario titles, and has been around for as long as Mario as existed in Super Mario Bros. onward, and remains to be a staple in history as one of the first collectible items in video games.

In the other Mario titles, such as the Mario Kart series, it starts in the first game Super Mario Kart and being removed in Mario Kart 64, and then brought back and taken out in numerous titles, including the latest main game, Mario Kart 8 Deluxe.

Coins, sometimes found in Item Boxes or just laid out across the track, can be gathered by driving into them or receiving them in Item Boxes. Once you get a certain amount, your Kart will gain speed, allowing for quicker race times (according to the people who work at Nintendo). If you crash into a player, depending on the game, you will lose Coins. So don’t go trying to knock someone off the edge, ’cause nothing is more important than keeping your Coins. Well, winning is more important, but still.

Coins are also collectible Items in Mission Mode in Mario Kart DS, as you need to get a set amount to complete the mission. However, they do not boost your speed.

Coins were used as units of pseudo-health. Coins were scattered on the ground and could be driven over like Question Blocks to be collected.

If a player collected 10 or more coins, they could go faster- keeping these coins was a challenge, however, as any contact with other racers or items would result in a loss of one to four coins. Having no coins meant that any contact with any other racer would result in a spin-out. The Coin item, which could be acquired by Question Blocks, gave the user an additional 2 coins.

After the absence of the coin in Mario Kart 64 (due to the Fake Item Box being present in that game), the coin returns in Super Circuit, where it works roughly the same way as in Super.

However, there are some differences in the value of coins: the amount of coins collected after a Grand Prix is used to calculate rankings, and the coin limit per track has been raised to 55. This high coin limit made for insane snowballing capabilities- at max coins and speed, characters could drive faster than Red Shells.

Although coins were not used in racing gameplay, they still appeared in several missions. These missions usually consisted of barriers set up around an area of a track with scattered coins, with the goal being to collect all of them before time runs out.

Again, coins were not used in races. However, the battle mode Shine Runners from the DS title was adapted to use coins- it was fittingly called Coin Runners. Coins are also seen in the various Tournaments of the game.

After an absence of the coin in racing, they return in Mario Kart 7. They work similarly to the ones in Super Mario Kart, although they now float on the course rather than laying flat on the ground, and now respawn after a short amount of time instead of disappearing for the remainder of the race. The coin limit is now 10- collecting any extra results in a short speed boost. Colliding with racers no longer takes away coins, but items may still strip coins off racers. Also, all racers start the race with a number of Coins equal to their final position in the previous race of the session, minus 1 (so 8th starts with 7 Coins, 7th starts with 6, 6th starts with 5 and so on).

Same as Mario Kart 7. Also the Coin item returns from Super Mario Kart. At the start of a race, depending on your position, you will have coins already in your collection in the bottom left, dependent on your position.

When you get hit by an item, fall off the course, or enter an out of bounds area, you lose 3 coins. If you lose the 3 coins by being hit, the coins will appear back out as a physical item in the shape of a triangle right to the side of the player.

If you fall out of bounds or fall off the course, Lakitu will recover you, and take 3 coins from your total. If you don’t have 3 or more coins, you will still lose what you have left and be docked down to 0. You can still collect the coins taken from you after being hit by an item, unless the other racers driving past you grab them before you do.

At the start of every race, depending on your position, you are awarded on-start coins which will allow you to have to chance to take first, no matter your position.