The Andrew Jackson dollar coins aren’t rare or valuable. However these coins in uncirculated condition can sell for a premium. Keep reading to learn more about these coins. 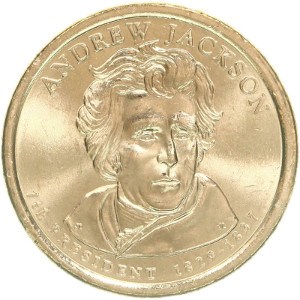 Andrew Jackson was the 7th president of the United States of America. The date range 1829-1837 inscribed on the coin signifies his time in office.

Proof coins are essentially coins that have more detail. They are minted on special planchets and it takes longer to produce them. They are specifically made for collectors so you won’t find any in your spare change.

The 2008 S proof Andrew Jackson dollar coin is worth around $4 in PR 65 condition.

Click here to search for Andrew Jackson dollars on Amazon.

MS 65 gem uncirculated- There is strong luster and eye appeal. A few light contact marks may be present but they are barely noticeable.

PR 65 proof- There are no flaws to this coin. A few blemishes may be present.