Dolores’s interest in fashion history dates from her teenage years when vintage apparel was widely available in thrift stores. 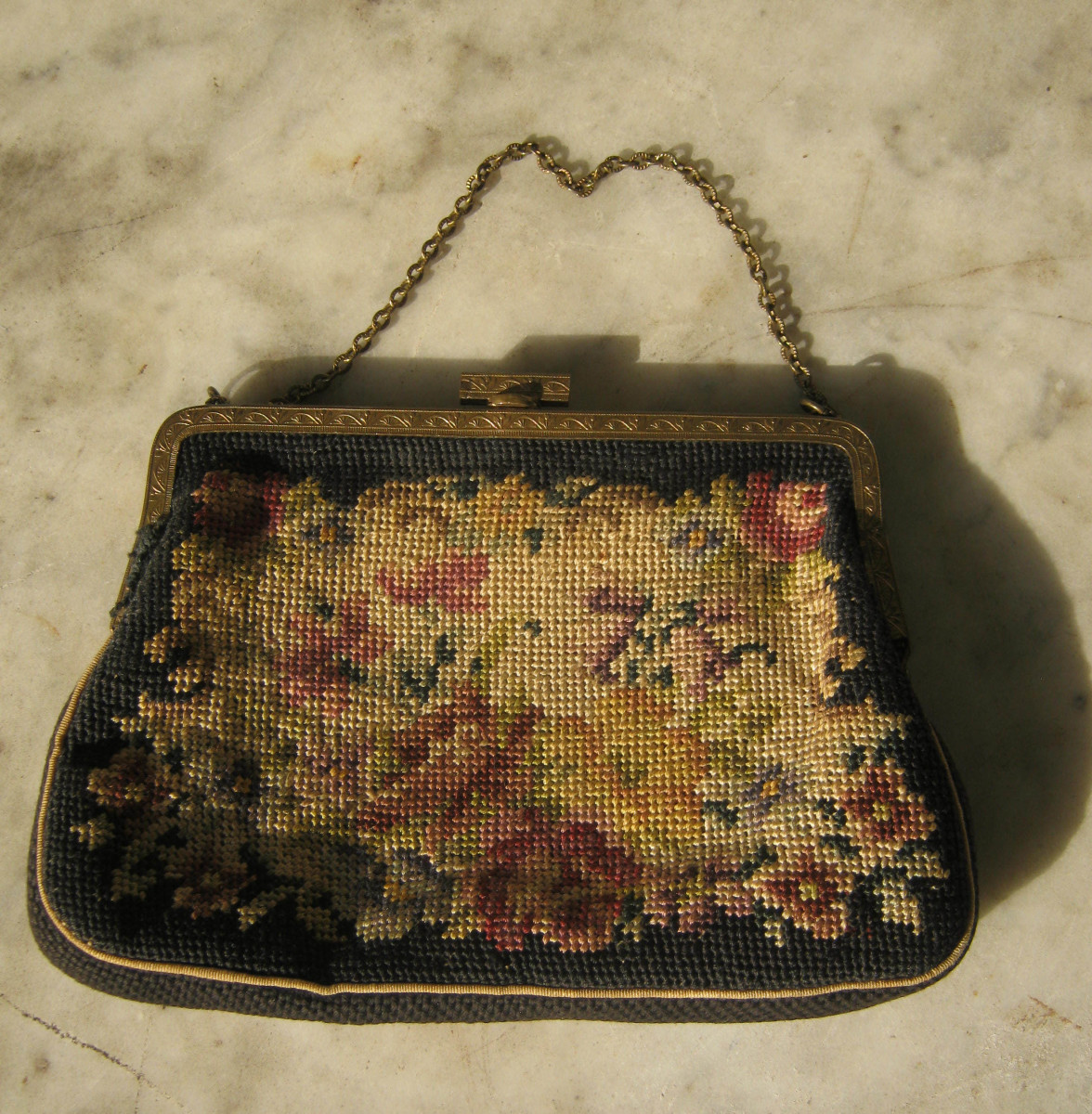 The Handbag: Functional and Fashionable

The handbag is an essential element of a woman’s wardrobe that is both functional and fashionable. Used to carry wallets, lipstick, phones, and other essentials, handbags can be as simple as a drawstring denim bag or a high-priced, designer status symbol.

Throughout most of history, both men and women used handbags for practical purposes. Ancient people used bags to carry weapons, tools, food, and flint (for fire making). Otzi the Iceman, a 5,300-year-old, well-preserved mummy found in the Italian Alps in 1991, had a pouch attached to his belt containing flint, a drill, an awl, and dried fungus.

Egyptians of the Old Kingdom (2686 – 2160 BC) used double handled bags made of linen and papyrus. The Ancient Greeks carried byrsa, or coin purses, hung from the belt which could be hidden in folds of clothing.

Archaeologists discovered an ornamental leather purse in an Anglo-Saxon burial mound in Britain. Dated to 625 CE (AD), the bag had deteriorated but showed evidence of gilt, silver, and garnet ornamentation and probably hung from straps on a belt. The purse still contained 40 gold coins.

A Byzantine relic pouch from the 9th century was found at St. Michael’s in Switzerland. Lined in red silk, the bag featured embroidered lions on a blue background. 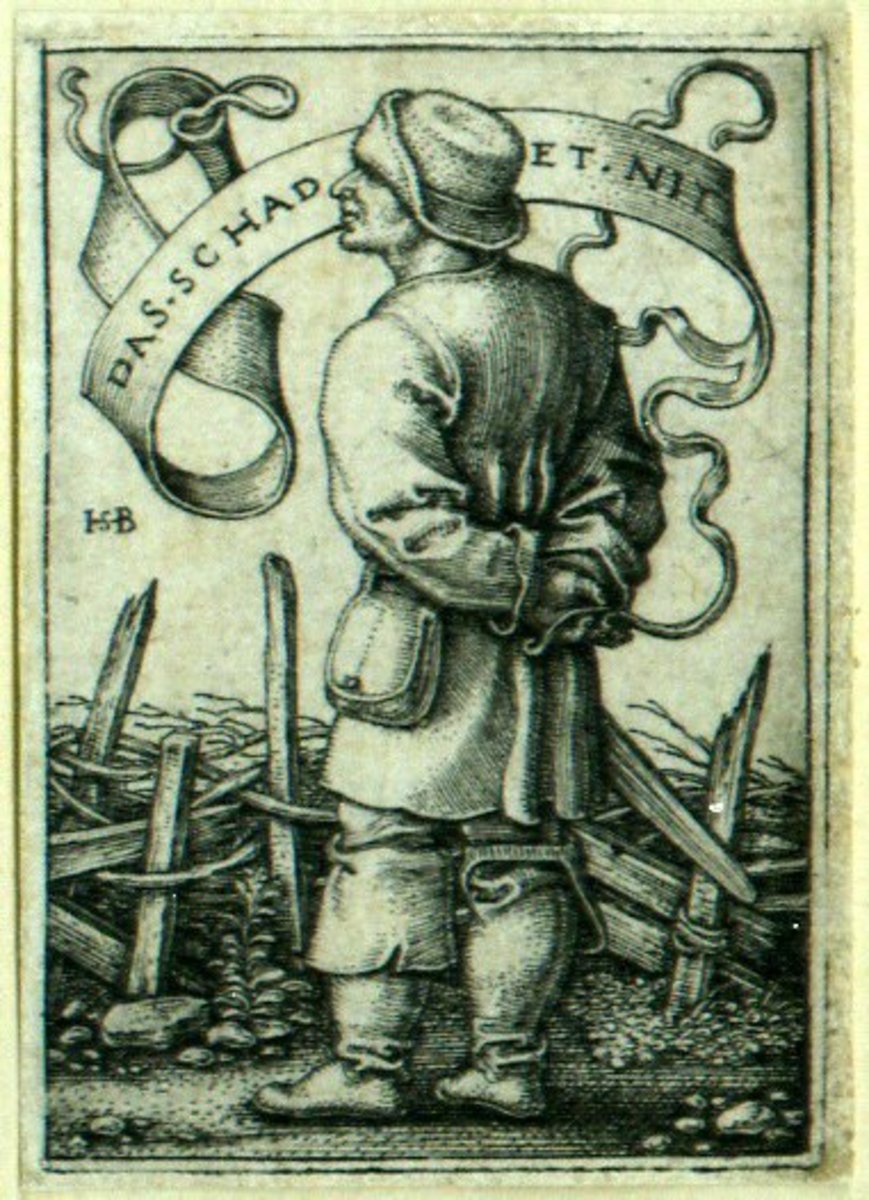 The peasant’s bag is similar to what we might carry today. Circa 1500s

In the 13th century, Western Europeans carried small purses called almoners; alms bags that held coins to give to the poor.

Working people, artisans, pilgrims, and peasants used what we would call handbags. The common mode of travel during medieval times was by foot and bags offered a convenient way to carry small goods from place to place. The poor man’s bag was made of recycled leather or heavy fabric and is known from depictions in artwork of the period.

More sophisticated versions were used by royalty and the aristocracy in their pursuit of courtly love. Beautiful handbags given as gifts were decorated with romantic scenes and sometimes humorous mottoes. A medieval gentleman gave his intended bride a pretty purse full of coins. 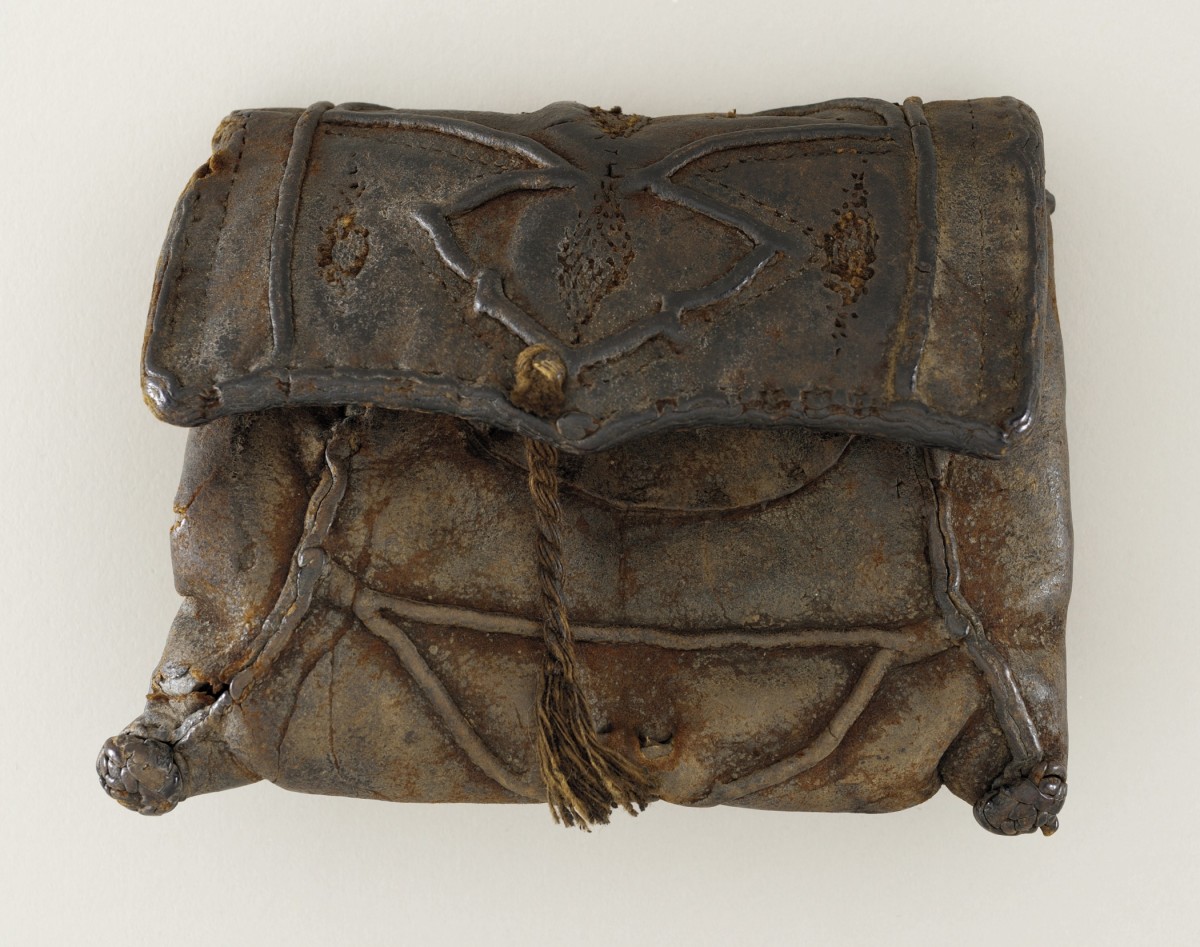 Handbags in the Renaissance

By the 15th century, large handbags with cast metal frames were carried by male aristocrats and royalty. Over time, handbags grew more fanciful, made of elegant fabrics with elaborate embellishments.

The Elizabethans enjoyed allegory and visual puns, for instance, an acorn shaped purse to connote thrift. The Museum of London displays a crocheted bag shaped like a frog. Made of cream colored silk, and silver mesh, the frog’s mouth served as the opening of the bag.

During the late 16th to early 17th centuries, tiny bags were status symbols for women. Small, embroidered bags held rose petals, spices, and herbs to cover up the smell of body odor and ward off infectious agents believed to be carried on unpleasant aromas.

The late Renaissance saw the development of the evening bag. Men and women carried flat bags that held gaming chips and coins for gambling. The bottoms of the bags were decorated with coats of arms used for identification.

Handbags of the 18th Century

The word “pocketbook” derives from a dimity pocket—a small book that featured a calender, recipes, songs, or fashion engravings.

The long, slim Directoire or Empire fashions of the late 1700s left no place for hidden pockets. Handbags made of netting (a reticule), silk printed commemorative and novelty bags became popular.

Handbags of the 19th Century

Fashions of the 19th century lost the slim silhouette when skirts became progressively larger with each decade until mid century. Women carried drawstring reticules and frame handbags, as well as small hand held bags for coins and small personal items.

The domestic ideal of Victorian England popularized bags that depicted sentimental scenes with embroidered and beaded images of homes and flowers. Women often made their own bags for a personal touch and to show off needlework skills.

Women began to own bags for different occasions; for shopping and travel, both hand and commerically made. The 1880s saw tapestry bags based on the popular luggage style called carpet bags. 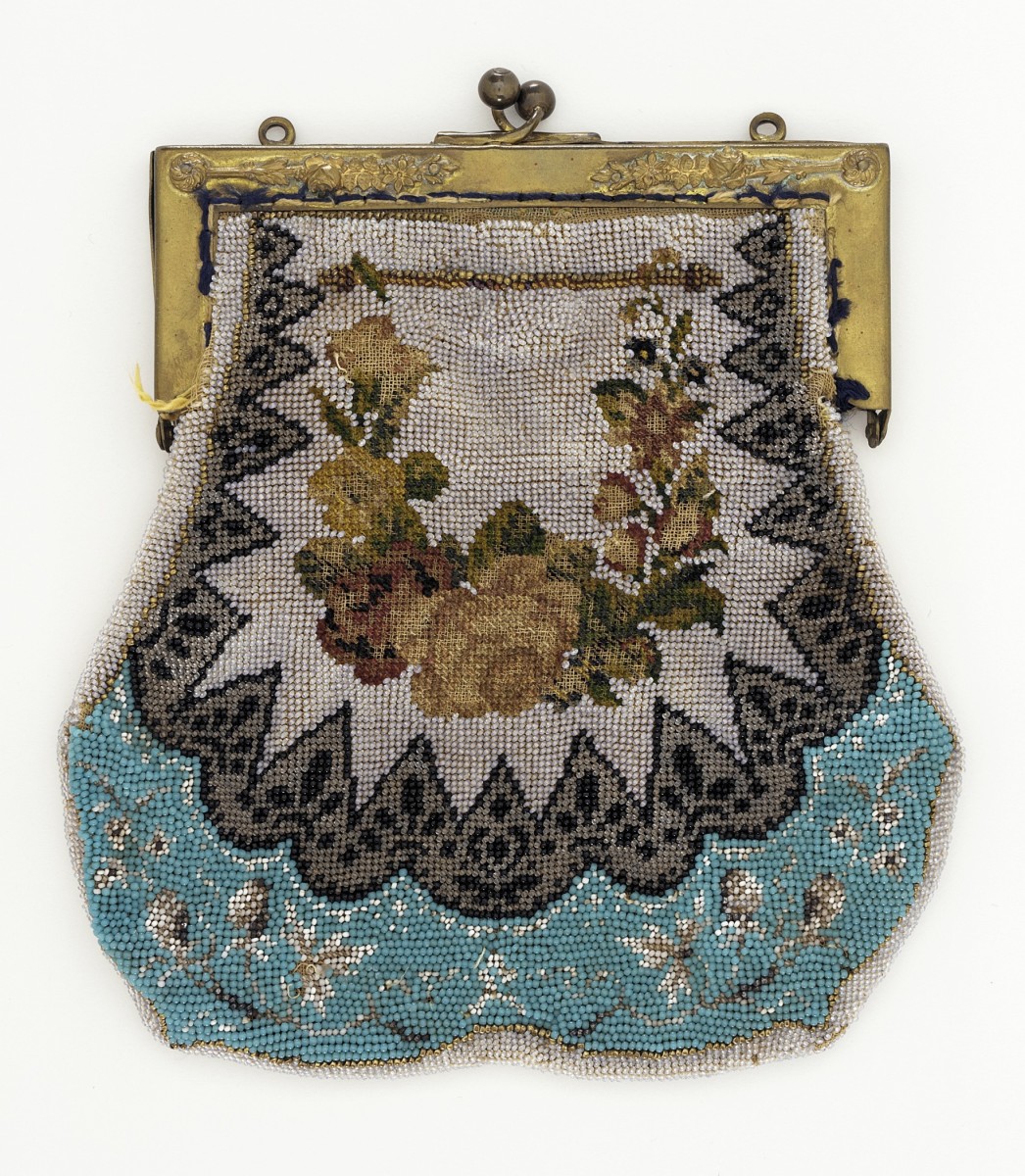 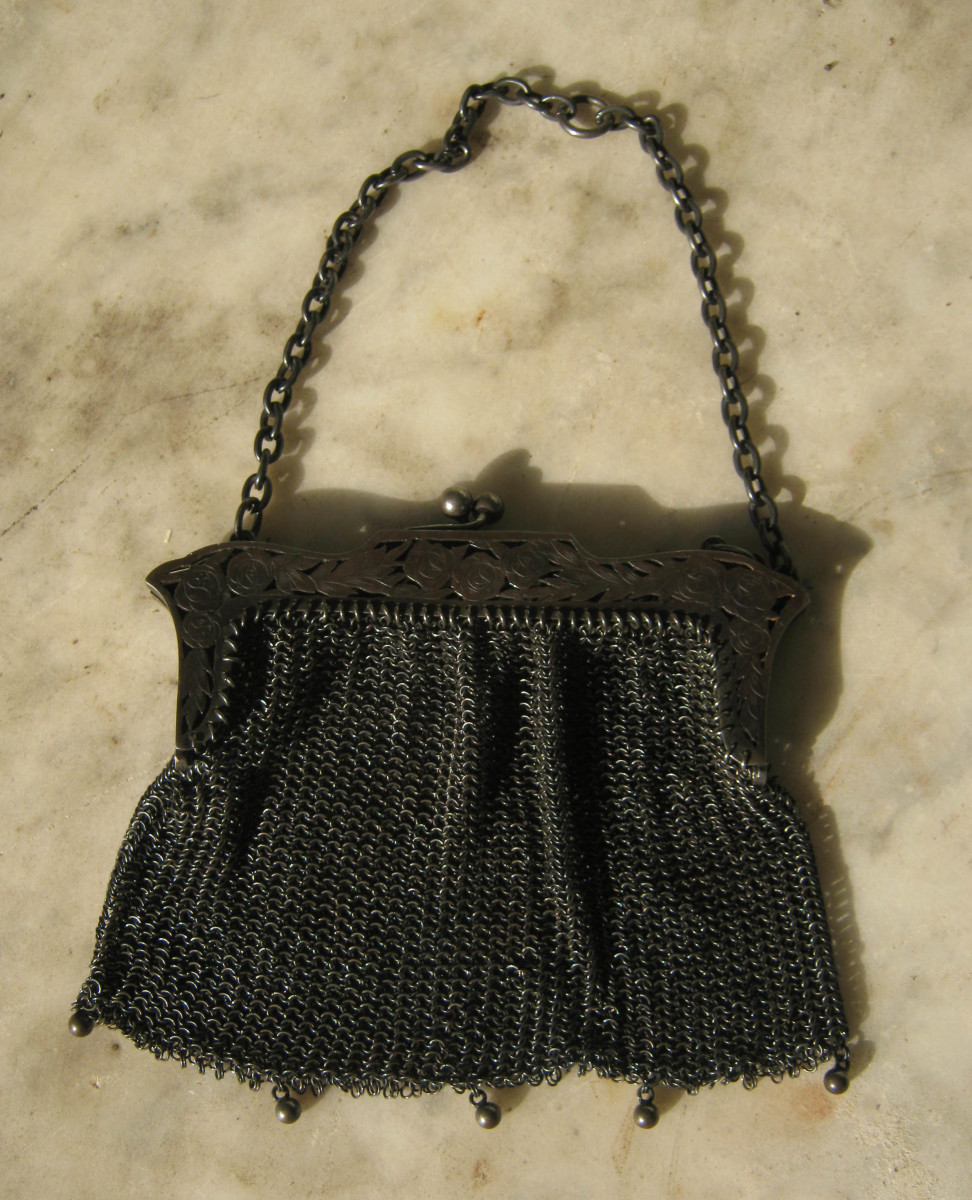 Handbags of the Early 20th Century

Beautiful bags cut from antique textiles were embellished with ribbon and lace. The love of Oriental styles influenced bags with Asian themed designs.

Fashions of the 1920s offered slim, plain handbags held close to the body. In 1923, Hermes transformed feed and saddle bags into fashionable accessories and set a style that lasted until today by using army cargo zippers as fasteners.

In 1932, Vuitton introduced a satchel used to carry champagne bottles and setting a style that has lasted for 80 years with shoulder strap bucket bags.

In 1933, Hermes created a handbag around a square piece of horse blanket, featuring thin central straps around a box shaped purse.

Restrictions on leather, metal and various materials during world War II influenced the simple, classic styles of the 1940s. Hand held bags made of fabric, knotted rayon, and cardboard were shaped liked envelopes and closed with flaps held down with simple clasps or toggles. 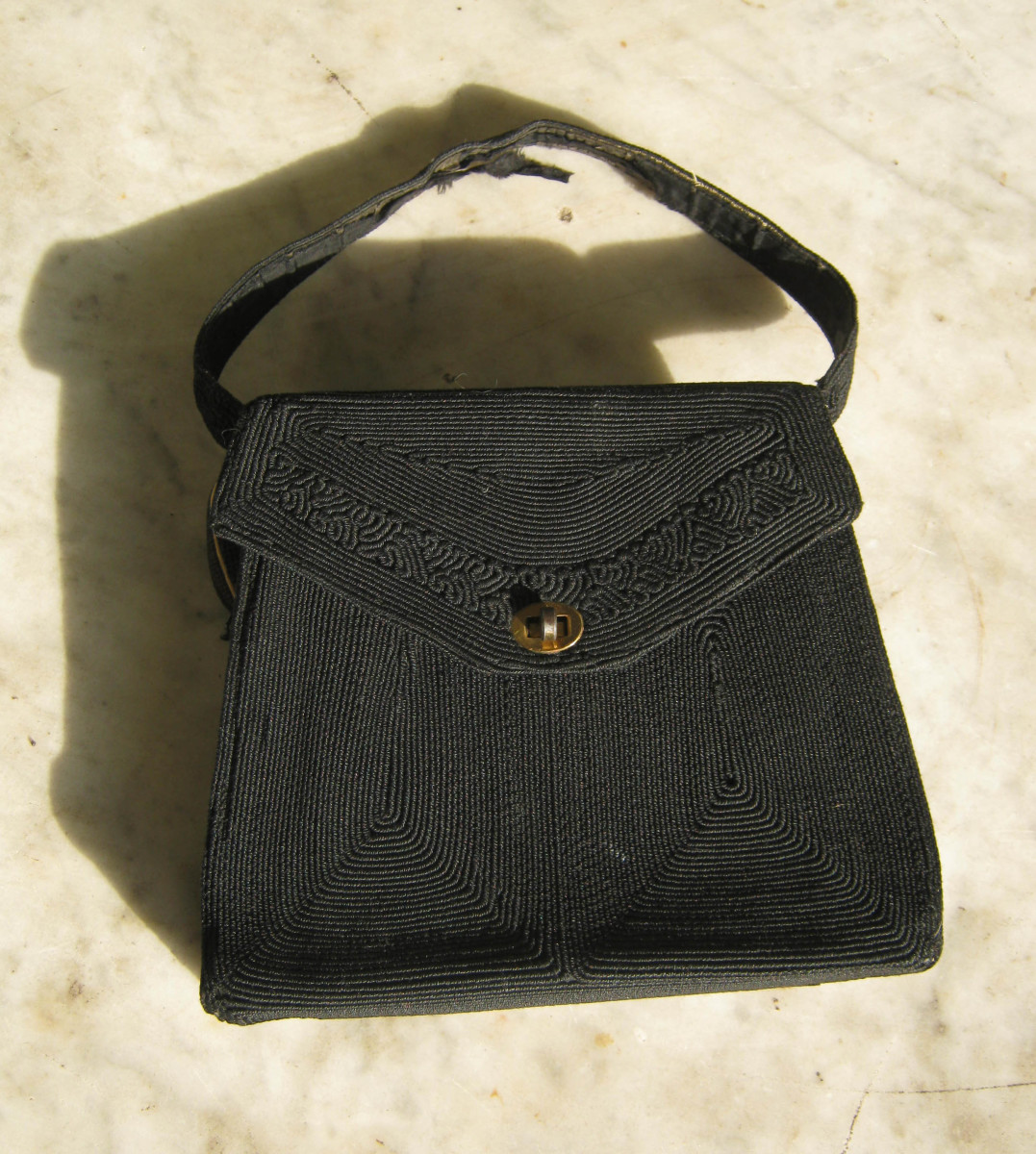 Purse styles of past decades carried on into the 1950s. Women often carried bags that matched their shoes. Fashionable women used cocktail bags for evening wear-small clutch bags made of satin and decorated with sequins.

Coco Chanel introduced her 2.55 bag in February of 1955. The quilted bag featured a long, double chain shoulder strap for a hands-free bag that was unusual in a time of hand held bags. This bag, and it’s imitators are still popular today.

Short strapped handbags made of a plastic called Lucite came in boxy shapes with pearlized, marbled, or faux wood designs that are now popular with collectors.

In 1935, Hermes came out with the Sac a Depeches (mail bag), a rectangular shaped bag with a flat bottom, made of fine leather, crocodile or lizard skin that was waxed to a fine sheen. When, in 1956, Grace Kelly used one of these bags to conceal her pregnancy from the press, the bag became a fashion icon. Known popularly as the Kelly bag, it became the most famous handbag of the 20th century.

The hippie culture of the 1960s brought a new interest in historical and ethnic styles. Shoulder bags made of exotic materials, or handmade macrame could be large as a tote bag or small bags to carry a few personal items. Fringed suede and hand tooled leather bags were also popular with the hippie set.

For the more conservative young women, fabric shops sold wood handles and kits for making lined, detachable fabric bags that could be changed to match any outfit. Some of these bags featured embroidered initials.

In 1984, Hermes introduced the Birkin bag, the ultimate status bag created by Jean Louis Dumas for Jane Birkin who had spilled the contents of her bag while on an airplane. Made of exotic animal hides and lined with goatskin, a Birkin closes with the top flopped over, wrapped and locked with buckle straps.

Bonnie Cashin designed colorful leather bags for Coach in the 1960s. The handmade bag with credit card pockets, and all matching hardware includes bags of rare leathers and limited editions, and has continued as a handbag icon to this day. 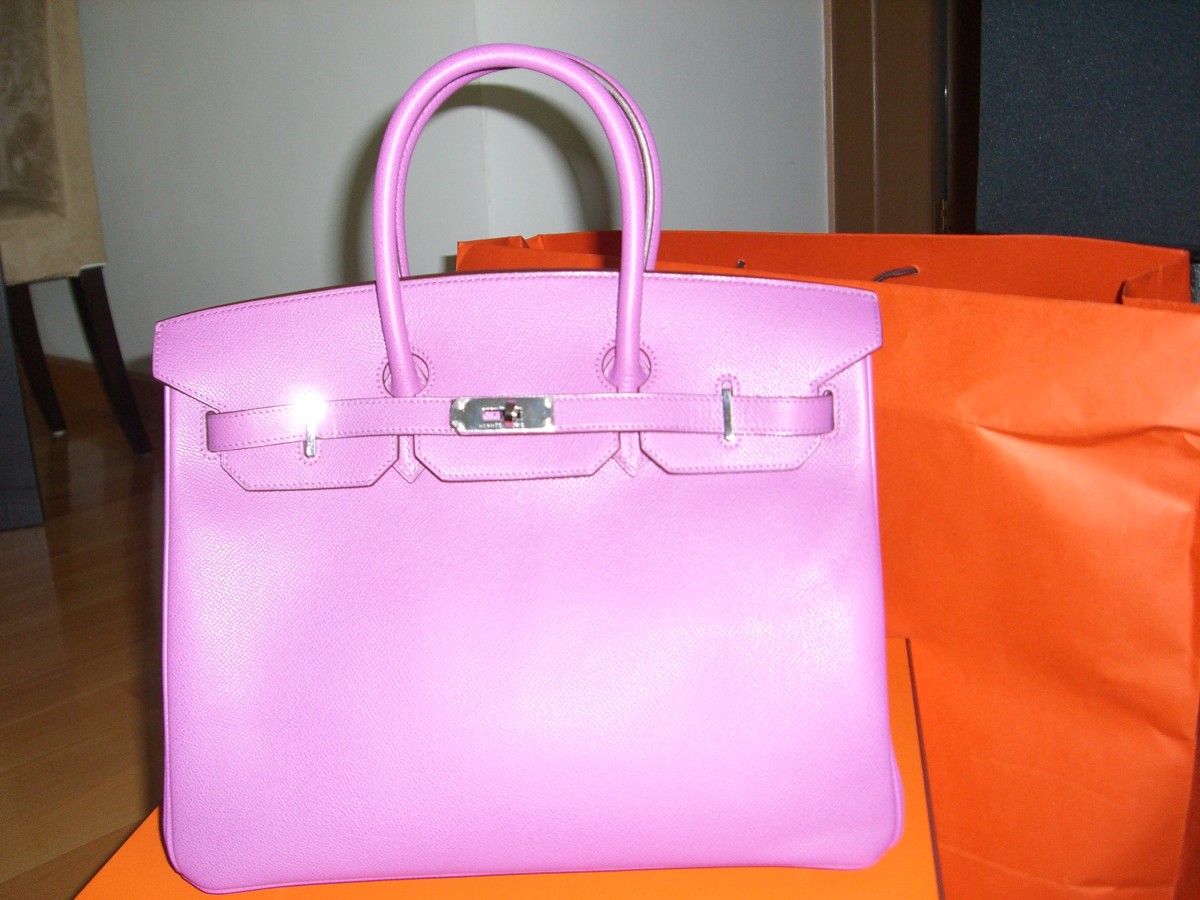 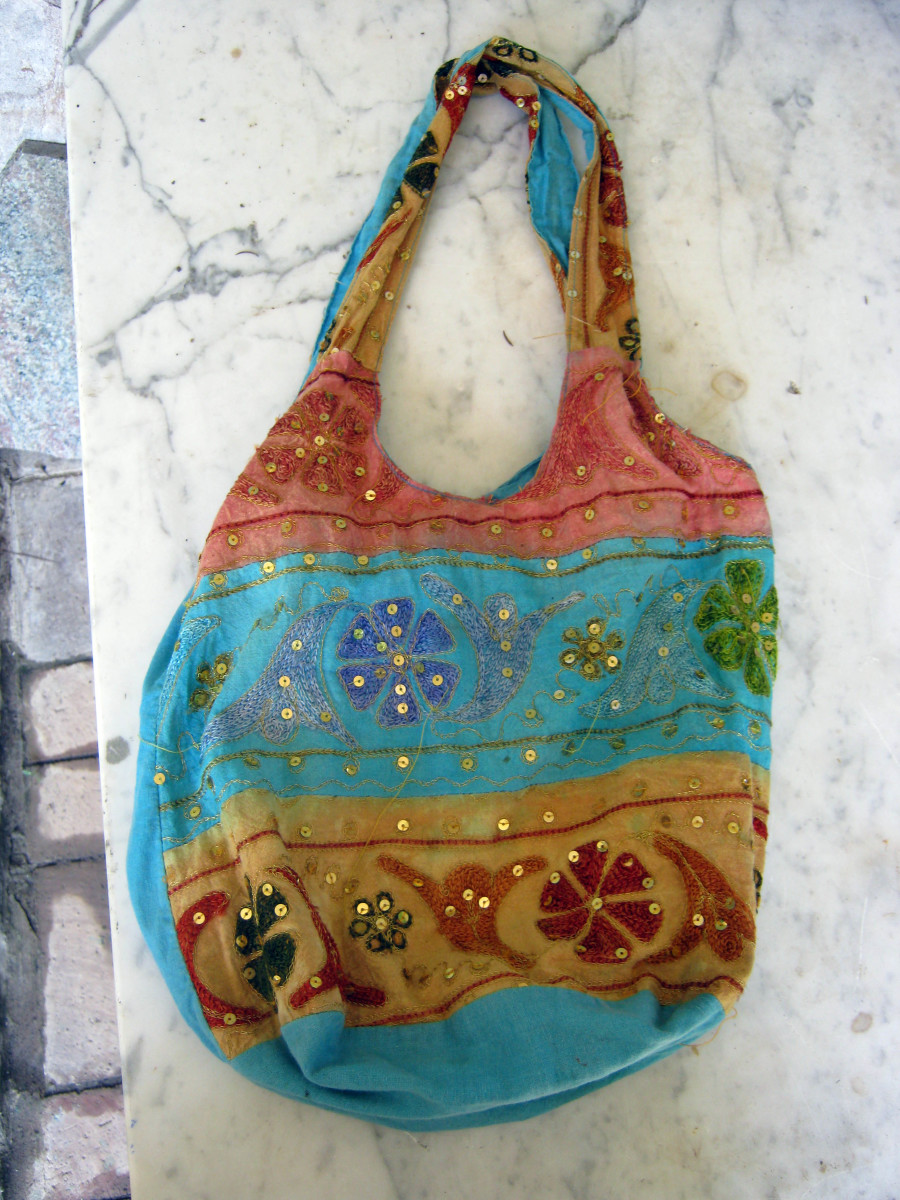 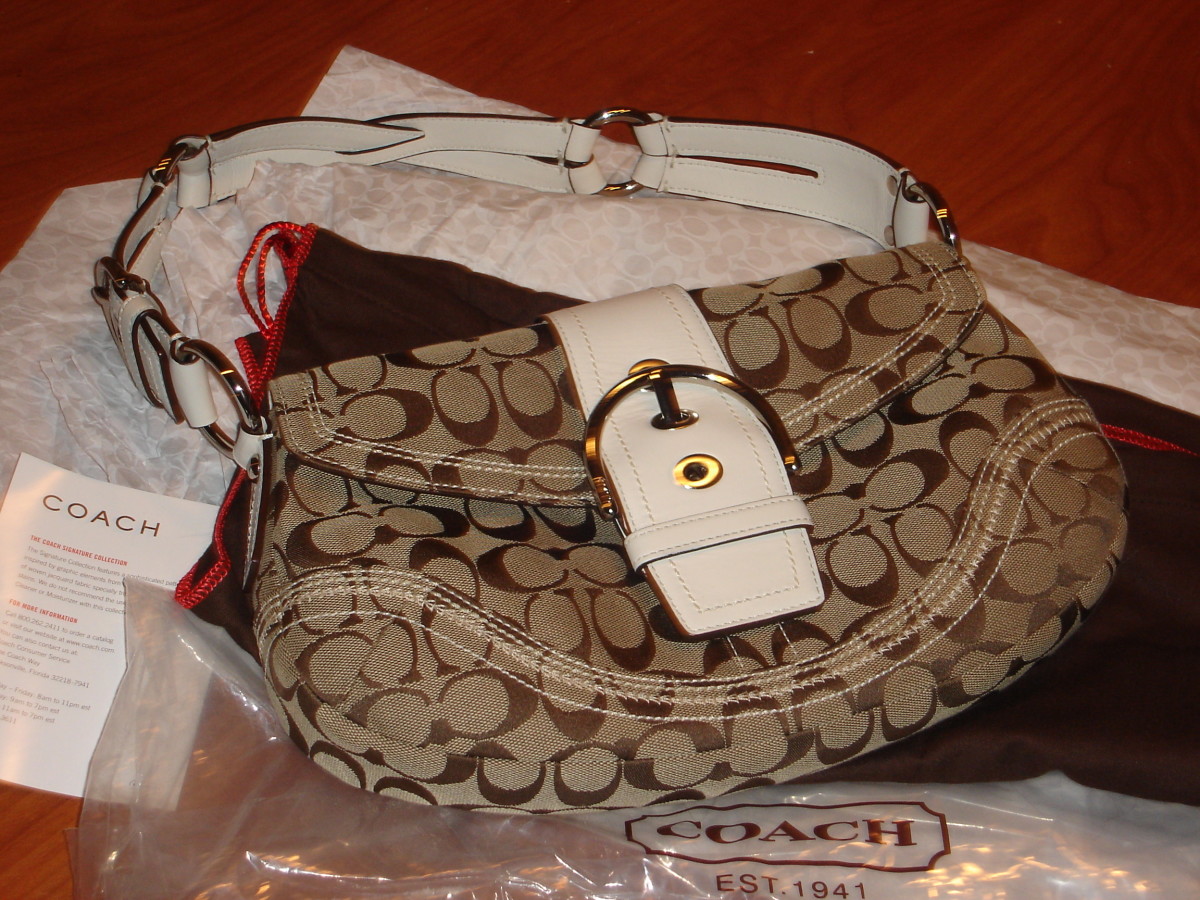 Carried Away: All About Bags by Fared Chenoune; Vandome Press

This content is accurate and true to the best of the author’s knowledge and is not meant to substitute for formal and individualized advice from a qualified professional.

Question: I got a high-end bag as a gift, how can I tell if it’s real?

Answer: If you want to learn more about your bag you should begin by identifying who made the item. Is it a Coach bag, or a Chanel? Both of these makers feature serial numbers. But just because it has a serial number does not mean that it is authentic. Serial numbers can be faked too. And certain serial numbers are always fake.

Take a good look at the details of your bag. Flimsy material indicates a fake. Look at the construction details such as stitching and hardware. Finer details indicate a high quality product.

You can learn if your bag is authentic by checking out the website of the maker. Official sites for Coach, Chanel, and others offer information on spotting counterfeit versions of their products. They also offer contact and customer care information in order to help you verify what you have.

Hi, Cogerson – I know. And the one at the top of the peasant, a drawing from the Middle Ages, shows a bag that lots of women carry. Amazing how some things don’t change over the years. Thank you very much!

UltimateMovieRankings from Virginia on November 03, 2011:

I love your historic hubs on fashion and how they have developed over the years. Great information throughout the hub but some of the more interesting things to me are the purse found in 625AD…really surprised that the purse still held 40 gold coins..and how the vintage bags of 1940 look pretty much how bags look today….I had to make sure I was ready the information correctly as the handbag in that photo looks pretty close to my wife’s current bag.