The first bags to be called ladies’ hand-bags appeared in the late Victorian and Edwardian eras, 1900 -1910s. Designs came from leather good trades rather than fashion houses. Vuitton, Gucci (est 1906), Prada (est 1913), and Hermes (est 1837) each started out as saddle, luggage, and harness manufacturers.  Hermes gradually began to use more “exquisite leathers” such as alligator, ostrich, and crocodile in handbag designs, elevating the bag into the fashion space.

After the turn of the century, leather could be dyed in rich colors like red, green, or purple, but most were black or brown. Bags also shrank down further at this time. Narrowing skirts of the Edwardian era meant there was no room for hidden pockets in skirts. This upset many feminist American women who pointed out that while men had an ample number of pockets in their suits and coats, women were required to give up one useful hand so they could carry a purse! 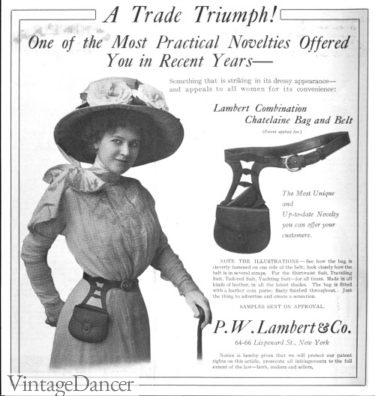 This didn’t stop women from using handheld and chatelaine bags, but it did encourage women to turn to more practical and masculine designs. Small leather bags with a wrist strap complimented walking suits of the Edwardian lady. In the 1890s, a favorite leather was green or maroon morocco leather. The use of crocodile, lizard, seal, goat, elephant, and faux reptile skins were also very popular during this era. They gave the purse a distinct texture, large or small, and an overall richness. 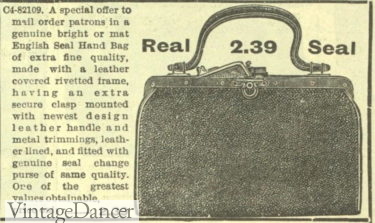 Depending on their purpose, they were fitted with internal pockets for a mirror, scent bottle, cards, glasses, and hanky. Separate coin purses, mirrors, and billfolds were also sold in matching set. Shopping bags were usually larger and void of these compartments, leaving more room for purchased goods. A large shopping bag was about 6-11 inches wide and tall. Hardly big enough for today! City women had department stores to thank for the necessity of larger shopping bags. Not only did they sell them, but they gave women a reason to leave the house for most of the day. Department stores like Macy’s in New York and Selfridges in London were social gathering places — not just for shopping, but for dining, taking tea, and attending events.

As WWI began, the small bag was once again replaced by a larger, practical, leather or faux leather shopping bag. Pleated tops allowed rounded shapes to become fashionable and lady-like. They came with either one wrist strap or two handles. Sturdy black fabrics such as heavy poplin were cheaper and washable.  They were sometimes sold in bold plaids and prints, which did a better job of hiding dirt.

After 1910, as women embraced their personal care outside of the home, purses were sold with combs, brushes, nail files, and mirrors. The chain handle purse with kiss lock and metal frame emerged around 1903. It was much prettier than the luggage style handbags. The leather handbag was considered too utilitarian for the many women. Fashionable women sought out delicately embroidered bags or metal mesh purses and chatelaines.  These were no more than 5 inches wide, usually less.

Chatelaines’ clipped to a belt or skirt waistband, whereas purses were hand carried. German chain metal mesh bags were highly collectable back then — and now.  They could have frame tops, gate tops, kiss locks, or twist locks. The reticule shaped bag remained as popular as they were in the Victorian era. They held fragile things, like opera glasses and other evening accessories. They could easily be handmade and elaborately decorated with beads and applique. They were more pretty than useful, although women decorated larger bags for home use — such as storing knitting supplies, lingerie, and slippers. The reticule adapted into new forms after the turn of the century. The Dorothy bag was made of soft materials and a drawstring top. It was often covered in beads and included a tassel bottom lined with silk, cotton, or velvet with a long cord or ribbon handle that hung at knee level. Some were decorated with steel beads instead of glass beads.

It was the velvet bag which crossed the lines from day to night. Rounded body with a long handle and even longer tassel on the bottom, it echoed the longer lines of the post-1910 silhouette. 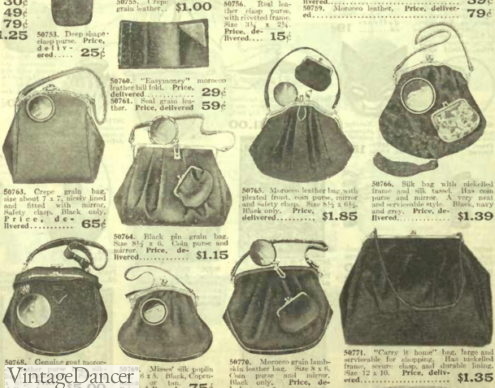 The small beaded handbag was a thing of beauty in the 1910s. Designs were scrollwork, florals, geometric patterns, and fruit. Gold beads on jet black, steel, or white ground are featured here: The tapestry bag was another fad, often featuring scenes from the three Musketeers or other romantic “old” scenes. 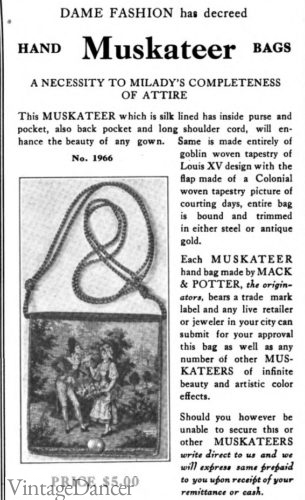 Asian imported tapestry bags such as the Japanese Netsuke (Nituski) used embroidered silk to embellish purses.  Tapestry bags were made from Persian brocade an other Asian fabrics too. The small tapestry bag was similar to the very large carpet bag, which was a Victorian era holdover.  They were used for traveling luggage. The fabric was the same “tapestry” found on beautiful living room hanging wall tapestries.  You may remember Mary Poppins arriving with her Carpet Bag in tow.

Carpet bags were out of style in the 1900s. Instead, Club bags or Oxford bags (similar to a Gladstone bag) were used for traveling by women and men. The Victorian- Edwardian leather purse is the most difficult of the purse styles to obtain today, although there has been a small revival for them recently. Evening bags and dressy reticules with embroidery, tapestry, beading, and metal mesh are much easier to find. However, locating one big enough to hold a cell phone is the real challenge.