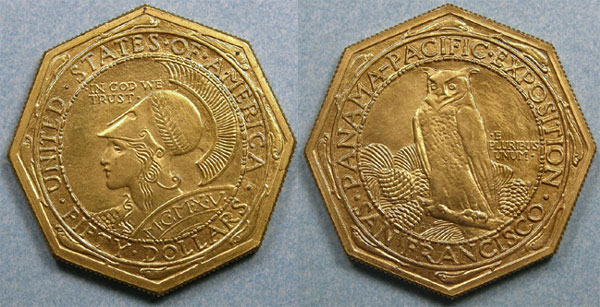 The lowest mintage and rarest commemorative coin of the United States is the 1915 Panama Pacific Exposition $50 Gold Piece (Buy on eBay). Available in both round and octagonal versions, the high denomination of the coins recalled the Humbert $50 slugs that were created in San Francisco during the gold rush. The coins were issued for the Panama-Pacific International Exposition held in San Francisco.

The obverse of the Panama Pacific Fifty Dollar Gold Coin features the head of Minerva, the goddess of wisdom, skill, contemplation, spinning, weaving, agriculture, and horticulture. Inscriptions include “United States of America”, “Fifty Dollars”, “In God We Trust”, and the date 1915 expressed in Roman numerals as “MCMXV”. The reverse of the coin features an owl, the symbol of wisdom and an animal sacred to Minerva. Inscriptions read “Panama Pacific Exposition” and “San Francisco”. The octagonal version of the coin has dolphins encircling the edge to represent the uninterrupted waterway created by the Panama Canal. The designer of the coin was Robert I. Aitken.

Sales of the $50 gold coins took place individually or as part of sets encompassing all of the Panama Pacific Exposition commemorative coins. Individual sales took place at $100. A combined offer for a four coin set (choice of octagonal or round) was also available for $100. Following the exposition, the five coin sets were available in special copper and glass frames for $200. Double sets were also available for $400.

This issue represents a trophy coin for many collectors due to its beautiful design, unique qualities, and low mintage. Surviving top graded examples sell for prices well in excess of $100,000. 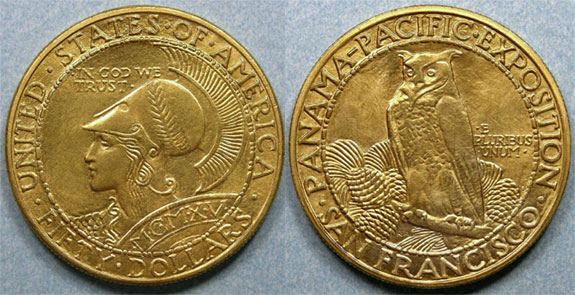